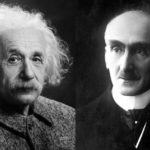 How Bergson’s philosophy robbed Einstein of a Nobel Prize in physics, via the great Brain Pickings (do click to read this fascinating story in its entirety)

When the Nobel Prize was awarded to Einstein a few months later, it was not given for the theory that had made the physicist famous: relativity. Instead, it was given “for his discovery of the law of the photoelectric effect” — an area of science that hardly jolted the public’s imagination to the degree that relativity did. The reasons behind the decision to focus on work other than relativity were directly traced to what Bergson said that day in Paris.