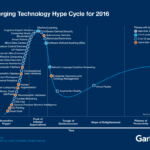 From Neuromophic Hardware to Ontology Management: the Emerging technology hype cycle 2016 from Gartner

Every year Gartner publishes this audit of the hottest new trends and techs in the world, helpfully laid out in an adoption curve, from hype to deflation through to full deployment.

So, what’s the one technology you’re most excited about in this list?

For me, the race to augmenting reality has to take the crown in 2016. We’ve been blown away by some of the devices demonstrated, and their applications.

Apple responded its much decried airbuds. Although pricey and unconvincingly similar to their previous (mediocre but iconic) earbuds, they boast a whole bunch of sensors which, paired to a phone, could make them very smart indeed – starting a podcast when you leave your home, telling you driving directions without looking at your phone…

And yet, Amazon may have beaten them both to the consumer’s living room, with its
Echos and Dots, which have just launched in the UK and Germany.

In many ways, augmented reality encompasses a half-dozen of
other Gartner’s 2016 emerging technologies, like virtual personal
assistants, natural language question answering or Smart Data discovery, packaging them up in a highly usable, consumer friendly way.

Who do you think will get it right first?