Urban farming is all the rage at the moment, with many looking at new options to transform suffocating cities into greener, more liveable homes. As we’re looking for options, turning to Renaissance innovations could give us a few ideas.

Among them, well before we could effectively manipulate glass to allow for greenhouses, 16th-century French and English farmers used the humble fruit wall. Easy to build, with no need for heating systems, and minimal energy leakage.

In and around the big northern cities of the time, notably London and Paris where the winter weather didn’t allow for much growing, many suburban areas got drastically transformed through the use of these walls.

The bricks would absorb the warmth of the sun during the day, and slowly release it during the night, preventing frost and creating temperatures of up to 6-12 degrees celsius higher than outside. Peaches could be grown as far up as London.

The need for the trees to be as close as possible to the wall made for interesting designs, needing constant pruning to maximise the efficiency of the system. Montreuil, next to Paris, was one of the centres of this practice, with up to 600km of walls by the 19th century.

The details in the original piece from the excellent LowTech Magazine are fascinating and should be food for thought for any modern ecologist. 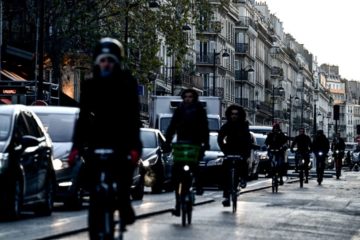 (via Paris Mayor Pledges a Greener ‘15-Minute City’ – CityLab) Just reelected Mayor of Paris, Anne Hidalgo has pledged in her manifesto to make the densest metropolis in Europe a “15-minute city” – or, in Read more…