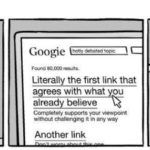 Cognitives biases are helpful. They are like shortcuts that help us think faster. But it’s essential to be aware of them to think straight. Mostly, we use them to overcome 4 types of problems:

Some others are more arcane, like cryptomnesia (in essence, involuntary plagiarism) or the Lake Wobegon effect (whereby one always tends to overestimate one’s capabilities).

Check out the full list of cognitive biases and continue to marvel at our brain’s limitless limitations!