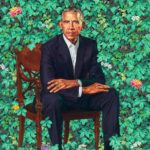 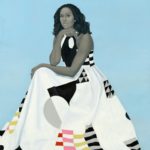 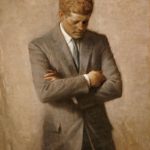 The newest addition to the collection of the Smithsonian’s National Portrait Gallery breaks with the tradition of rather stale official portraits to offer a window into the artist’s, and Obama’s, view of statehood.

Resolutely modern, in spite of the rather stern chair and suit, the background is a striking departure from the portraits of a George W. Bush for instance.
Michelle Obama’s, commissioned to Amy Sherald’s, is, perhaps more so than her husband’s, shrouded in elegant contemporaneity. And often, she certainly is on par with Barack, if not one step ahead.

The tradition, which started with Gilbert Stuart’s painting of George Washington, has also seen artists taking some liberties to interpret the subject’s legacy. A favourite among the rather classic looks of yore is John F. Kennedy’s casual leaning and pensive pose.